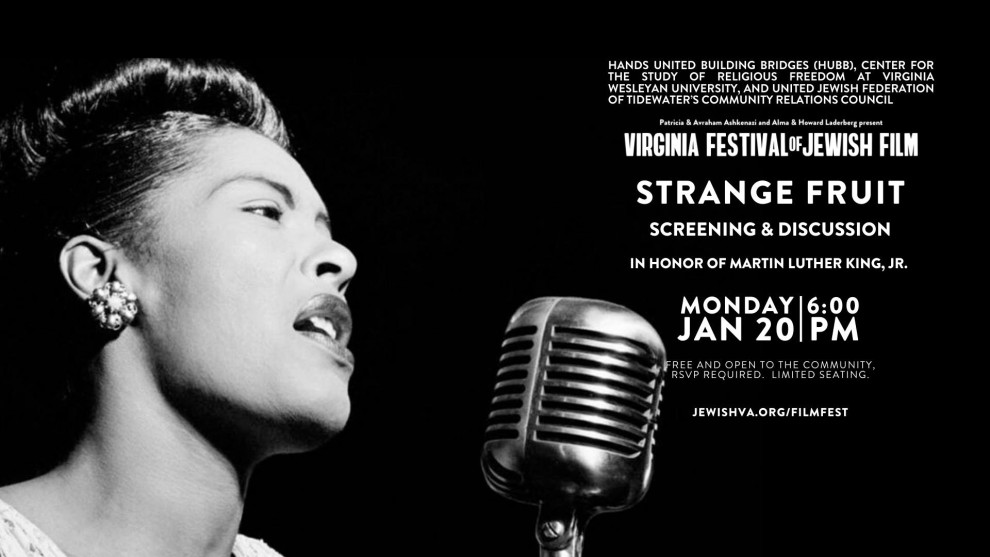 This event is SOLD OUT.

STRANGE FRUIT, a film about a controversial protest song about the lynching of a black man, will be shown in HONOR OF MARTIN LUTHER KING JR. DAY, Monday, January 20, 6 pm, at Susan S. Goode Fine and Performing Arts Center at Virginia Wesleyan. Written by a Jewish teacher in the Bronx, and made famous by Billie Holiday, the song’s stirring lyrics and powerful delivery fueled a major movement and inspired the documentary that traces the history of the song, as well as jazz genealogy and lynching, all while exploring Jewish-Black relations. Strange Fruit is part of the 27th Annual Virginia Festival of Jewish Film. A conversation follows the film with Rabbi Rosalin Mandelberg of Ohef Sholom Temple, Michael E. Hucles, Ph.D Associate Professor of History Emeritus of Old Dominion University, Cassandra L. Newby-Alexander, Ph.D., Ted Roese, FBI. This event is FREE and OPEN to the community with RSVP required. For more information, 757-321-2338 or JewishVa.org/FilmFestival.