Denomination: Worship services combine elements of Reform, Conservative, and Orthodox
The Commodore Uriah P. Levy Chapel is the oldest Land- Based Military Jewish Chapel in the Continental United States. Opened as the Jewish Chapel at Naval Station in 1942, the chapel was dedicated to Commodore U. P. Levy for his achievements as the First Jewish Commodore (in George Washington's Navy) and his dedication to the abolishment of flogging as punishment. First dedication on December 9, 1959. The Levy Chapel is a focal point of Jewish life for sailors, their dependents, reservists, retirees, civil servants, and ANY service member of the Armed Forces. (all branches) 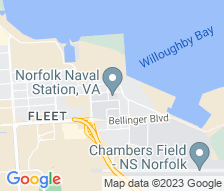